I’m excited to announce that I will be working on a Fallen Cycle interactive fiction game!

Or more specifically, a puzzle/mystery based investigation game.

Retro gaming is in, right? Well, it doesn’t get much more retro than a good old fashioned text game.

As many of you know, I had recently come down with a bad case of Lyme disease, which put me off my groove for more than a couple days, let me tell you.

During that time, I tried like hell to work on The Witch-Doctor reboot. I really did. The illness was keeping me up at night. I didn’t feel well, but not wanting to wake my girlfriend, I sauntered over to my computer desk.

I didn’t have the attention span to rewrite or edit, so I started messing around with this software a friend of mine told me about and I’d downloaded, which can be used to make text games.

After awhile, I thought to myself, “What the hell?”.

So I decided to keep with it.

See, I like the idea of engaging with writing in different ways, and trying to make my writing accessible to all sorts of people. That’s partially why I’ve worked on BLACKOUT (a comic) and The Witch-Doctor (a podcast), and am now going to be plucking away at this game in my spare time.

It won’t be out for awhile, but I’ll be sure to post updates as I progress on the game.

Elements of the screenshots provided will likely change as the game is developed. Some names, objects, and locations are/were placeholders for me to figure out what I can or cannot do with the game.

The plot is being worked out, and I hope to have more to tell you folks about here in the near future.

I’m going to be putting most of my attention towards The Witch-Doctor, but hey, sometimes you need a change of pace, you know?

The game will include a tutorial, written by me, so those of you who’ve never played a text-based game before will know what to do.

The game will also include dialogue with NPCs. 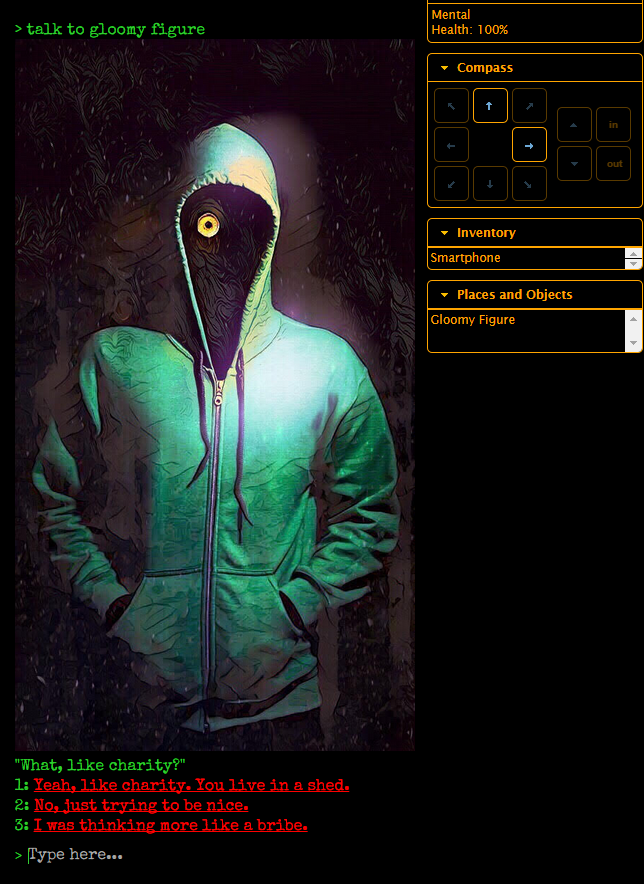 It will also include a wide variety of objects that you can ‘look at’ and interact with.

One of the major objects is a “smartphone” object, which act as a temporary light source that has to be recharged. 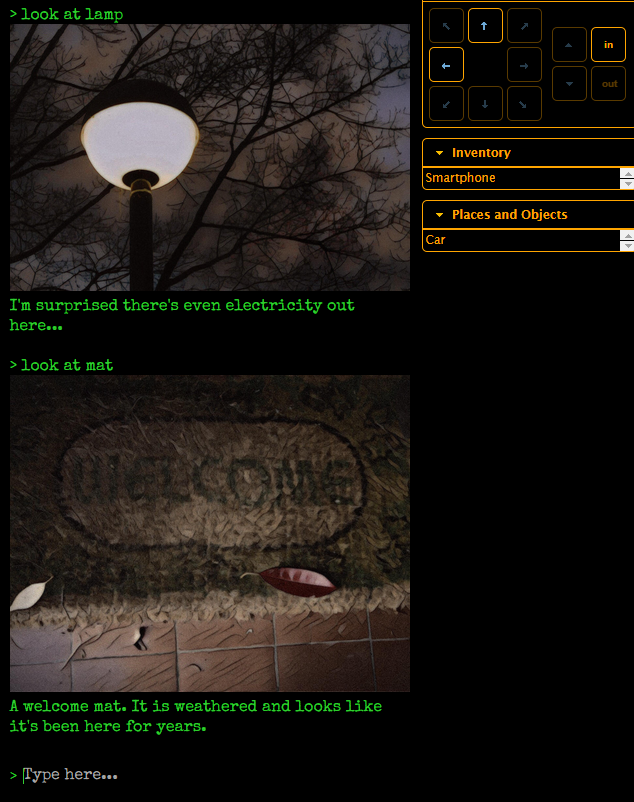 And there are many more features to come!

Well, that’s about all I can show you folks right now. I hope you’re as excited as I am for the new addition to the mythos. I will keep you updated on the A.P.I.R. game as it develops.