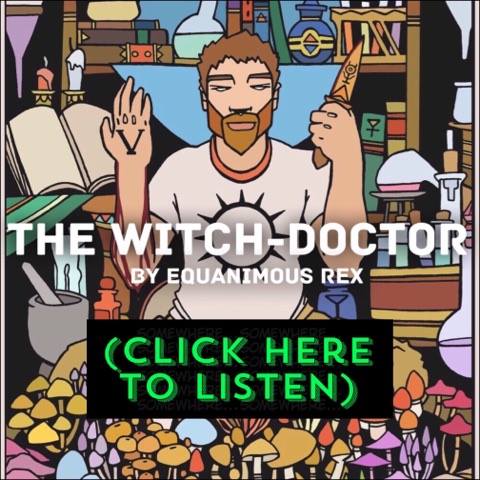 (You can find links to the audio/podcast versions of The Witch-Doctor episodes here.)

(You can find the project’s Patreon here.)

You are reading an episode of The Witch-Doctor, a serial fiction podcast based in the Fallen Cycle universe.

A man walked through the forest shade, beside a brook. Smooth stones crunching beneath his feet, he rounded the bank, stepping over and atop small boulders, passage to the other side. The brook fractured into a murky froth on the rocks that lined it, flecking his boots, hanging a brackish perfume in the air.

On his back the man wore a simple brown rucksack, from which the most peculiar assortment of objects hung. They swayed with every step, often striking against one another with audible clinks and clangs. Affixed to his pack were patches, and metal charms, bones wound with copper, a menagerie of plants flourishing in corked bottles. The low-hanging branches of trees caught at some of his treasures, but he did not seem concerned. He was shod head to toe in patchwork, salvaged and bound with frequent — and crude — stitching. A hood covered his head, and a black bandanna masked his face. Two halves of mismatched sunglasses, welded together in the middle, obscured his eyes. He gripped a walking stick —some piece of deadwood from the forest— in one gloved hand. In the other, he held a dried-grass basket, the top of which was covered with a piece of cloth. No firearms, no weapons of any kind, could be seen upon his person.

The stranger stopped, examining the edge of the brook. Studying its lines and curves. Mosquitoes buzzed, maddened at their inability to pierce his skin. He swatted at them half-heartedly, and mumbled curse words when they’d fly under and get caught in his hood.

When a loud crack emitted from the forest behind him, he paused, and turned silently towards the trees.

Bursting out of the foliage a brown and white dog came hurtling towards him.

“God!” he exclaimed, from beneath his bandanna. “Calm down would ya? Sit. Sit!”

The dog skidded to a stop at his feet, nearly knocking him into the water, missing only by inches. It was a stocky and muscular mutt, but not large, its head only reaching to the man’s knees. The dog’s tongue lolled out playfully, dripping and wet. It squinted and its ears flopped to one side proudly.

“Stay,” the man ordered, and he held a hand up toward the dog, and stepped back to look at the stream. After a couple seconds, the man cursed and looked back at the dog. It was sniffing at a cluster of pale ferns beneath an oak, twenty feet from where he had been.

“I told you to stay!” he yelled, shaking his walking stick at it. The dog turned and looked at him, moping, and sat next to the ferns.

“No, that’s not what I…” the man started, but gave up, and sighed. “Come here.” Snapped fingers, pointed to the ground. The dog cast dark soil into the air as he launched towards the man, spun, and sat dutifully at his feet.

“We’re going to have to work on that energy,” the man sighed. “Why don’t you go take a nap?”

The dog responded by chewing on its testicles shamelessly, making guttural, wet noises of ecstasy.

“Have fun with that,” the man said, and he continued on his way down the side of the stream. The dog —not wanting to be left behind— followed him, loping alongside lazily.

“Twenty six. One hundred and eighty two. Six.” The words rolled off his tongue like spittle, he didn’t even hear himself anymore.

They were walking away from the river now, a much larger, much nastier waterway that flowed parallel to the brook. He had not wanted to get near. Having scouted southward, he found the river smelled like blood and aerosols. Something up-river no doubt leaching into the water, he guessed.

That rivers a goddamned hazard, that’s for sure. I wonder if the townies drink it. They can’t be, he mused as he trod.

One hundred and eighty two.

Almost six months back, when snow had covered the ground, and breath turned to steam in subzero air, the stranger had first approached, then given the town a wide berth. Considering himself a seasoned veteran to territory travel, he’d been cocky, eschewing the respite of the resettlement in favor of a more hasty northern trek. His goal, so far out of reach for so long, was finally close by. The Wilder— or more accurately, what lie within.

Miles to the west he’d found a half-collapsed bridge, never repaired. The two of them, man and dog, had climbed across the rubble. They had entered the forest beyond. The same forest through which they now walked.

The original trek through the Wilder had proved slow, ultimately dangerous. At first appearance, the woods had seemed normal, if bleak. The ground already thick with snow. Bereft of leaves the trees had looked skeletal, cautionary. Warning him from approach.

But the further he got past the ice-dusted scrub-brush, the wider the spaces between the trees, the fainter the light of the world beyond seemed to fade. The man had watched the material reality of the land shift. Relics of the past, gone wild. Flourishing — despite sense—  in the cold seasons as assuredly as the hot.

Around here, tumors and growths grew haphazard through both flora and fauna, to such an extent that spotting a specimen lacking such tell-tale disease was disquieting in its own right. Flightless birds jumped squawking from tree to tree, spraying the dog and him with clouds of musk. Carnivorous pines, sticky-sap needles curling around a perfectly healthy looking robin. Cat-sized wooly toads hunted squirrels with forked dual-tongues. He’d seen a few of these last ones up close, hopping and bleating, along the edges of a makeshift camp. The dog had tried to antagonize one. Being almost assuredly poisonous, the man was forced to tie a length of rope around the dogs neck. He’d taken care to knot it so as to ensure it remained a fixed loop. Creatures of instinct in a counter-intuitive anomaly, the both of them.

They had run out of food, been forced to trap prey. Dried scraps of rabbit and squirrel thrown down the bottomless well of their combined hunger. The man had been hesitant to forage. The Wilder was… abnormal, and he was uncertain about the extent of taxonomical divergence from the southern lands. With the flux that seemed part-and-parcel with the Wilder.

Despite the hardships, the ruins had called him. He knew that there were ruins in the area. There was no other reason a resettlement would exist this far out in the Territories. The land was hostile to agriculture. There was no way to reliably capitalize on the lumber that the forest no doubt represented to the locals—  at least, in the theoretical. Not a lot going on, not a lot able to go on. Scavenging would be the only way they could retain even the most tenuous of connections back to the Domus. To civilization.

Many border towns had grown along the edge of the Wilder. The stranger had seen more than a few of them. Most fell apart, rotting, abandoned within the first few years. The Territories were a nightmare place, as far as anyone “civilized” to the south was concerned, and to most accounts this sentiment was carried equally by locals. The land bore uncanny illnesses, muties, and held dangerous relics. Rumors abounded of so-called savages, the Essil. Wilder-folk, who had made the land their home. Whispered to have adapted to the land after the Purification, an event barely recalled by citizens of the Domus. The great exile. The grand deportation of “undesirables” that had occurred long before anyone alive had been born.

If you broke the Devout’s laws these days, you got shipped south. But decades previous, it had been common practice to send folks north to the Territories. The practice had been deemed a kinder, gentler form of punishment, a replacement for the oft-utilized methods of burning, hanging, and firing squad.

Happy day, you’ve been promoted, he imagined a deacon saying, you’ve gone from undesireable to expendeble. Aren’t you just overjoyed? Bastards. The man had only seen a glimpse of the Territories, of the Wilder. Already his heart bore deep sympathies for those who had been forced out here.

A cool breeze licked the back of his neck. Though his body continued to walk alongside the brook, his mind stepped backward, further into the past.

A crunch-crack, whipping pain against soft lips and eyelids. Ankles snagged by ropey vines, sending him sprawling forward, scrambling, pushing up against the snow. Ice wedged between nail and pulp, muscles tearing.

They were hunted, pursued ceaselessly for two days and nights. The dog lurked closely, never straying. Its flaccid tail hung between its leg. It ran with its master when running was called for. But it drooled, its eyes twitched uncontrollably, and the man knew the dog could not keep it up for long.

The man had entered into delirium, into the paranoia that lives at the root of terror. Pin-prick sensations. Frostbite. Skin deadening and going hard.  At times convinced he was nearly succumbed to Wōd’s great, endless and bloody hunt some believed awaited the wicked soul’s ebb from this world.

Last shreds of reason gone, emboldened, half-dead and desperate, the man seized a head-sized stone and circled back on the predators. His eyes rested upon a track in the snow, and he waited and listened. They were of a size and dimension he had never seen, and as he studied them, the rock fell from his fingers, and he ran without looking back. A full sprint, blessed by that fabled second wind of the runner and the doomed.

Time passed, the sun rose, and shattered architecture peeked between treetops. Ruins. Buildings. Steel, concrete, and euclidean geometry. The dead grass, still erect in the snow, grabbed at him as he broke free from the forest and stepped out into the the remnants of a long dead civilization.

The present came back to him. The dog was growling. The man squatted, setting his basket and stick beside a rotten stump. He raised a hand and made a soft hissing noise, and the dog fell silent, hunkering down on all fours, ears back.

The man removed the strap of his rucksack from one shoulder, and leaned the pack down, next to the basket. He heard sounds from over a slight hill. He stretched forward and walked on all fours, silently, closer and closer. The dog crawled behind him.

When they got to the top of the hillock, the man peered through his mix-matched sunglasses. He saw three men around a campfire, amid an assortment of packing crates, and an overturned canoe.